I can see from the underwhelming number of comments on yesterday's post that everyone is sick of goals and resolutions. So, lets move quickly to some more exciting news. Mark Phillips has a new sci-fi book out - The Resqueth Revolution. 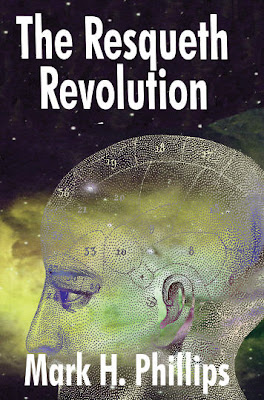 If you like your sci-fi thrills to include mind-bending science mixed with over-the-top action, scientists vs. alien invaders, flying saucers, ray guns, revolution, and even a bit of romance, then this is the book you've been waiting for.

In The Resqueth Revolution, we follow Steve Marks - a disgraced physisist who has paid for his younger indiscretions and now seeks the opportunity to work in a scientific field. Shunned by all credible research organizations, he joins a group that exposes paranormal fraud and learns all is not fraud. He soon finds himself immersed in a battle of good vs. evil, right vs. wrong - the kind of ethics test he failed as a young physisist. He is determined to do what is right this time. But what is right? Who are the bad guys? The aliens? The government? The elite group of scientists working on a secret government project? Steve's own lover? How much is Steve willing to risk in the name of integrity?

Mark H. Phillips grew up in central Illinois reading the classics - expecially Greek mythology, Doc Savage novels and lots and lots of Batman Comics. He is a graduate of both the University of Illinois and Northwestern University. He lives in Houston where he teaches pre-calculus and political philosophy. In addition to The Resqueth Revolution, Mark co-writes the Eva Baum detective series (Hacksaw, First in the Eva Baum Detective Series and "Death on the Bayou", a short story in A Death in Texas).

Full Disclosure
I have been asked why I didn't write a formal review on Resqueth. The easy answer is

that I'm married to the author and felt like some readers would view that as a conflict of interest. Do you think I'd write a favorable review just because the author was the love of my life, my rock, my soulmate? Do you hear laughter in the background? That would be people who know me well hooting away because they know there's no way. In fact, my standards are higher for people I know than they are for strangers.

The real reason I didn't review the book is quite simple - I don't feel qualified to review sci-fi books. My avoidance of the entire genre started innocently enough in junior high school. My English class was required to read Stranger in a Strange Land and I hated it. I could list the reasons, but then this post would go on for pages and pages. Many, many, many years later, my gorgeous husband begged me to give Heinlein a second chance and suggested The Moon Is a Harsh Mistress. After months of constant harassment, I mean discussion, I agreed to give it a shot and thoroughly enjoyed the book. On a recent car trip to Illinois, we passed the time listening to Dune, which began slowly but eventually caught my attention, then interest. By the end I had to admit to enjoying the story. I also read and thoroughly enjoyed Pauline Baird Jone's The Key. I've since been told by Ms. Jones that her book is more space opera, not hard-core sci-fi.

So there you have it - my complete list of sci-fi reads. Any guesses as to my favorite? I'll tell you mine if you tell me yours. Seriously, help expand my sci-fi reading list. Use the comments link below to share the title of your favorite sci-fi book, and please say why it is your favorite.
Posted by Charlotte Phillips at 6:15 AM

I haven't read a lot of science fiction, but I had the pleasure of reading The Resqueth Revolution in draft and I highly recommend it. A very compelling story!

Hi Charlotte,
Thanks for reviewing my new book on your wonderful blog. I look forward to seeing your readers' comments.

I've heard lately that SF has fallen on hard times, with authors leaving to write in other genres. But I am convinced that there are still many discriminating readers out there who fondly remember works that combined exciting adventure with cutting edge speculations about science and the universe. I hope I am contributing in my own small way to a tradition that will never die out.

And thanks to Ms. Sellars for her meticulous help with editing. She did far more than catch grammatical and spelling errors, giving detailed and nuanced advice on every detail of my wordsmithing and story structure. She is a wonder and I look forward to working with her on my future endeavors.

Charlotte,
I'm not a sci-fi fan, but after finishing reading your post it got me thinking, maybe now I would like science fiction. I loved the old Star Trek series and Star Wars, so maybe it's time to pick up a book.
Thanks.

Good for you Joy! Mark has read much in the genre. I bet if you shared a few more details about what you like to read, he could recommend something to you - in addition to Resqueth, of course:-)

I loved Heinlein in earlier years. funny as I haven't read sci-fi in years now; maybe I overdid it then. But this sounds like something to renew interest in it!

Good to see you back here. How are those dogs of yours doing?

If you pick up Resqueth, be sure to let me know what you think.

Congrats to Mark! I've ordered my copy of Resqueth from Amazon - can hardly wait to start reading!

S,
Hope you enjoy it. Can't wait to hear what you think.
Thanks,
Mark

Writers and the Business of Writing